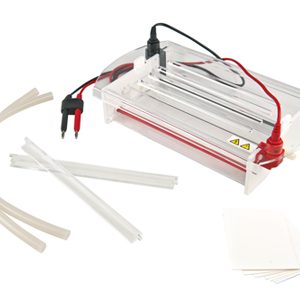 In humans, the genetic link of certain diseases between sex-linked hemophilia and color blindness was first observed. However, the application of the principles of genetic linkage to diagnosis was limited until the richness of the genetic markers present in DNA could be easily detected using the DNA molecule itself. Two main types of DNA variation can be detected between different individuals or between a pair of homologous chromosomes of the same individual:

The size of the human genome (about 3 billion bp) and the frequency of variants/deletions in the sequence suggest that the total number of common variants should be in the tens of millions. Theoretically, markers linked to any disease gene can be analyzed by DNA typing.

Traditionally, RFLPs have been detected by hybridizing DNA probes, radiolabeled with phosphorus 32, to the Southern blots of restriction fragments separated by agarose gel electrophoresis. One of the first applications of RFLP markers in inherited diseases was for the prenatal diagnosis of sickle cell disease. Other markers of interest are:

Detection and visualization of genetic markers

The detection of genetic markers for DNA typing poses two problems. In the first, it is necessary to visualize the region of particular interest of between the three billion bp of human DNA. And, second, it is necessary to be able to discriminate between slightly different variants of the same DNA fragment.

Visualization has traditionally been based on the exceptional affinity of a single-stranded DNA probe molecule for its complementary strand. DNA probes, radiolabeled with phosphorus 32, have been hybridized with immobilized single-stranded DNA in nitrocellulose or nylon membranes, with the bands corresponding to the hybridization regions detected by autoradiography.

An alternative approach uses PCR to amplify specific fragments that lie between a pair of primers on opposite and complementary strands. The product can be directly visualized followed by electrophoresis in an agarose gel containing ethidium bromide (EtBr). When irradiated in ultraviolet light, the EtBr dye that is bound to the DNA will produce a yellow fluorescence.

Why choose a Kalstein electrophoresis cell?

These cells are suitable to obtain the patterns of bright lines typical of the separation of DNA fragments obtained, since gel electrophoresis is an important technique to separate a large variety of molecules in genetics, and that offered by the manufacturer Kalstein, is suitable for different studies, such as the diagnosis of genetic diseases. This equipment is characterized by:

The prices of these devices are really competitive and you can review more information such as purchase, quote or other technical details at HERE

previousImportance of Moisture Analysers in the Tobacco Industry