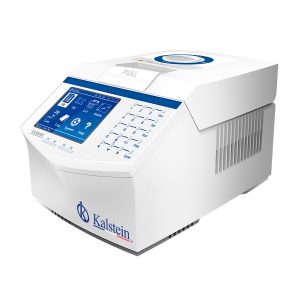 A real-time thermo-cycler is a device that simultaneously accurately regulates thermal cycles so that the DNA chains are multiplied by the polymerase chain reaction (PCR), while incorporating a technology that allows the reaction to be tracked. To achieve the latter purpose, the thermocycler is incorporated with a fluorometer, which is made up of an excitation source, absorption filters, a radiation detector and the electronics needed to process electrical signals and transform them into digital signals suitable for computer equipment.

In general, the emission source emits radiation that must have the characteristic frequency, to be absorbed by a chemical or fluorophore species (which is added to PCR) and cause the excitation of some valence electrons, which are then relaxed to the fundamental state by radiative mechanisms (fluorescence), this emitted radiation being detected and amplified. In this sense, to understand this technology present in real-time thermocyclers, the operation of the excitation source, absorption filters and radiation detector will be explained. No mention shall be made of fluorometers optics, which generally use lenses that focus the incident and emission radiation beams.

Detection of molecules: source of excitation

Real-time PCR monitoring requires fluorophore excitation with characteristic uv-visible radiation. For this purpose, sources have been designed that emit radiation in the form of lines such as lasers, band sources such as LED diodes and UV lamps, or continuous sources such as tungsten lamps. The most common ones in the equipment we’re describing are LEDs, for the following reasons:

LEDs operate under the principle of direct polarization of a semiconductor diode; the current flow under this condition causes a band emission spectrum to be generated in the visible region of the spectrum. Diodes that emit radiation can be used in bands characteristic of the spectrum, which gives them a characteristic color, or so-called white LEDs, which emit all frequencies of white light of the spectrum; the latter are the most used, since a band of the emitted frequencies can be selected with the appropriate filters.

What are wavelength selectors, especially filters?

Absorption filters are devices that absorb an area of the electromagnetic spectrum and transmit the rest. In general, they are made up of a sandwich structure, with two pieces of glass containing inside an absorber that is added in attention to the color you want to select: red, blue, green, etc. Absorption filters provide the following advantages:

How does the radiation detector work: CCDs?

Charge coupled detectors, better known as CCDs, are devices that convert light into an electrical signal and are widely used in various optical sensors, such as digital cameras. In its general form, the CCD sensor consists of very small units or pixels of a semiconductor material, which by the incidence of a photon produces the jump of an electron to the conduction band, which can then be read by the pixel discharge. CCDs have many applications for the following reasons:

The ability to detect radiation of different wavelengths simultaneously enables the equipment to detect more than one emitting species in a chemical reaction when coupled with the appropriate wavelength selector. By design, the fluorometers detector is placed at a 90-degree angle to the excitation source.

What does Kalstein offer on these teams?

The company, as a leading manufacturer in instrumentation, makes available to researchers, scientists and professionals in general, who use real-time thermocyclers, equipment with the best technology in this field of study, which provides versatility and robustness. Such is the case of the real-time PCR system YR01869-1/2, an equipment with extensive performance.

With this equipment, the reaction can be tracked in each well, in two and five channels, due to the LED excitation source and the high-resolution CCD detector with which it comes equipped. In addition, it is a very user-friendly computer, since it can be attached to a computer and with a very friendly, intuitive and easy to use software. For more details about the equipment, you can consult prices and purchase, you can contact the link HERE

previousFunctions of Color Evaluation Boxes in the Textile Sector

nextWhy are ultrasonic cleaners used for the ophthalmological sector?