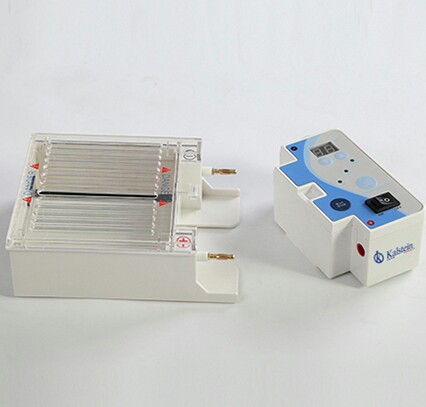 Two-dimensional electrophoresis (IEF + SDS-PAGE) is the most widely used technique for the global analysis and separation of the components of the proteome (set of proteins that are expressed from a genome at a given time).

Isoelectric focusing is a type of electrophoresis that is used to separate charged molecules. It is based on the fact that a protein has charged groups of both polarities, so it has an isoelectric point (pI) that corresponds to the pH value at which the molecule has a net charge (z) equal to zero (zwitterion), and therefore it is immobile in an electric field. By applying the potential difference, the proteins found in regions of pH lower than their isoelectric point will be positively charged, and will migrate towards the cathode; while those that are in regions of pH higher than their isoelectric point will have a negative charge and will migrate towards the anode.

In this type of electrophoresis, sodium dodecyl sulfate (SDS) is used, which is a detergent widely used in biochemical preparations because it firmly binds to proteins and makes them assume a disordered structure in order to obtain efficient denaturation. This technique allows the separation of proteins in the order of their molecular masses by the effects of filtration through gels.

The main application of two-dimensional electrophoresis is expression proteomics; With this technique, the protein expression of two samples can be compared qualitatively and quantitatively. It has been widely used in the preparation of reference maps, that is, in the dissection of the protein composition of a certain cell organelle. These maps are used to compare various experiments, such as treatments with drugs or toxic compounds, healthy or diseased tissues, culture conditions, normal and tumor cell lines, it is there where two-dimensional electrophoresis acquires its maximum functionality.

At Kalstein we are MANUFACTURERS, so you can BUY excellent electrophoresis systems for your laboratory at the best PRICES. That is why we invite you to take a look at our equipment available at the Products menu.

previousHow does a pH meter work?